What effect Judge Morgan's decision to limit future ablation treatment testimony may have is open to question. Her defense Daubert ruling in a case subsequently settled would not materially impact treatment recommendation evidence at other recent trials.fn Nevertheless, when ablations for life remains a recommendation of physicians, her memorandum opinion will be must reading for future briefs on the issue.

Presented with proposed testimony of Drs. Schlosser and DeFrancesch recommending 30 years of annual ablations, Judge Morgan documents the medical literature offered in support and opposition to the defendant's Daubert motion.

The Second Circuit reversed a defense judgment sustaining an exception of no cause of action. Plaintiff sued the Minden PD for its actions in connection with reported sexual abuse of her daughter. A mandatory hospital referral to the police and ensuing investigation culminated with a decision by the medical staff to forego "rape kit testing." The daughter allegedly attempted suicide, partially in reaction to the loss of chance that the perpetrator could be held accountable.

The panel's discussion of duty-risk and "Child in Need of Care" (La. Ch. C. art. 601, et seq.) legislation is informative.

Defense results often don't make the cut for reporting here. Plenty are reported at CompQuantum, but to include in an email, there must be an issue of compelling interest. And today we have one, but not without the company of two significant plaintiff judgments.

Plaintiff worked as a Merchant Mariner from 1966 until 2002. Asbestos exposure and development of mesothelioma led to multiple legal actions in California and this suit in the Eastern District of Louisiana.

Pretrial motions considered by Judge Sarah Vance included defense Daubert motions to exclude testimony on medical causation. Finding that neither Dr. Robert Harrison, an occupational health and environmental medicine expert, nor Dr. David Tarin, an expert pathologist, knew enough about the plaintiff's exposure to provide "specific causation" testimony, the evidence was excluded. Lacking support for a causal relation between plaintiff's alleged six-week exposure on the vessel AVOCET and his cancer, the court further granted summary judgment for the defense.

Judge Vance's detailed discussion will be of interest to anyone dealing with difficult medical causation issues. It is not an asbestos specific opinion. The depositions of Drs. Harrison and Tarin are also posted at CompQuantum.

For the second consecutive Newsflash, Darrell Papillion features as prevailing counsel. A Western District, Lafayette Division jury awarded $2,000,000 wrongful death damages to the wife of a worker killed by a natural gas pipeline valve failure. Each of three surviving children was awarded $100,000.

The defense argued that plaintiffs' claims were subject to workers compensation exclusive remedy. A jury finding of a "significant causal link" between the death and defendant's offshore operations allowed tort recovery under the Outer Continental Shelf Lands Act.

Following a five day bench trial, Judge Milazzo issued her findings and signed a judgment awarding $3,308,094.55 total damages under the Longshore and Harbor Workers Compensation Act. The court found that the injured worker was not a Jones Act seaman. The owner was not entitled to limitation of liability on finding knowledge of the captain's "unsafe custom of allowing equipment to be offloaded from the M/V TROOPER without first tying up the vessel."

I will be unveiling a host of never before seen trial court stats and covering recent trial quantum at the Baton Rouge Bar Association Bench Bar Conference in April. Come for the enlightenment. Stay for the comfort of Point Clear's beautiful Grand Hotel.

Joshua Simpson testified that the second to last truck of an oversize load convoy veered to the left, striking his box truck. The driver of the trailing vehicle testified that Simpson caused the minor accident, then attempted to flee.

A case of careless customer service

On evidence that "service area" employees violated internal safety regulations, a Jefferson Parish jury assigned 75% fault to the defendants for backing a car into their customer. General damages for rotator cuff and knee meniscus tears and a lumbar injury treated with ablations totalled $360,000. The judgment also included special damages of $172,746.

The scrutinized activities included a day care operation and rental of an insured property. In Latour, a three judge panel reversed the trial court and granted summary judgment for Allstate Insurance Company on finding that the policyholder breached a duty to properly supervise a child under her paid care. Judge Sylvia Cooks dissented. A five judge panel in Parker held that "there are genuine issues of material fact as to whether the property at issue was being leased on an occasional basis," potentially triggering an exception to the exclusion (emphasis added). Judge Cooks authored the Parker opinion.

The majority in Latour looked to "the alleged actions or omissions of the insured upon which liability is asserted and whether those actions further the operation of the daycare." The Parker, opinion quotes The Law of Liability Ins., Rowland Long, Matthew Bender & Co., Inc., § 9.06[2]:

These opinions work remarkably well together to define understandable parameters for analysis of a buisness pursuits exclusion defense.

An interesting issue of LIGA credit

Judge Piper Griffin recently ruled in favor of LIGA, allowing a credit for medical expenses incurred by a Medicaid eligible plaintiff even though she had not and could not submit the bills for payment under the program. See, Anderson v. Gutierez-Cruz, 2015-00611 (Civil District Court 10/24/18).

At issue were $5,408.12 of billed medical expenses related to treatment for injuries incurred in a March 1, 2014 motor vehicle accident. The deadline for submitting the bills to Medicaid for payment was November 12, 2015.

Plaintiff filed suit against an insured of Affirmative Casualty Insurance Company. Rather than going through Medicaid, she sought recovery of medical expenses through liability insurance. When Affirmative was declared insolvent on March 24, 2016, the Medicaid deadline was expired.

LIGA claimed a credit for medical expenses under Louisiana Revised Statute 22:2062. Plaintiff opposed the credit, arguing that before LIGA's obligation ever existed, her right to the alternative benefits was extinguished.

Judge Griffin recognized the "unfortunate" consequences, but concluded that the statutory "expression of legislative will" superseded "plaintiffs' equity argument."

"Statement on the physician acting as an expert witness" - The Bulletin of the American College of Surgeons, Vol. 96 No. 4

With the kind permission of the publishers of the Bulletin of the American College of Surgeons, CompQuantum is posting its "Statement on the physician acting as an expert witness" for your reference.

In 2016 we reported on the Supreme Court's remand of a Houma medical malpractice suit for retrial based on the "miscarriage of justice" brought about Judge Timothy Ellender's "bizarre and disturbing behavior" during trial. See A judge is gone, but not forgotten. Preparing for my October 29 CLE presentation on 2018 trials for the Terrebonne Bar Association, I ran across the re-trial result.

The second time around was no more successful for the plaintiff. Another 32nd JDC jury concluded that plaintiff failed to prove Dr. Schwab's treatment fell below the standard of care. See, Logan v. Schwab, 165,756 (32nd JDC 03/22/18). Perhaps Justice Crichton correctly dissented on the majority conclusion that a re-trial was necessary.

This trial will be among several from Houma discussed as part of my 3:00 p.m. hour on 2018 trials in Houma on October 29. We will, of course, cover many more from across Louisiana. Join us if you are able.

Several paragraphs describe details that don't seem to suggest a final statement on the impropriety of credibility determinations for summary judgment purposes. Rather, the facts, as described, could be grounds for explanation that the plaintiff's credibility alone, no matter how strong, could not overcome an "absence of factual support for" proof of constructive notice. Nevertheless, the matter returns to the 9th JDC for further proceedings.

Witness: “grating can play tricks on your eye... . " From four to eight feet away, the hole in the platform looked like solid floor. 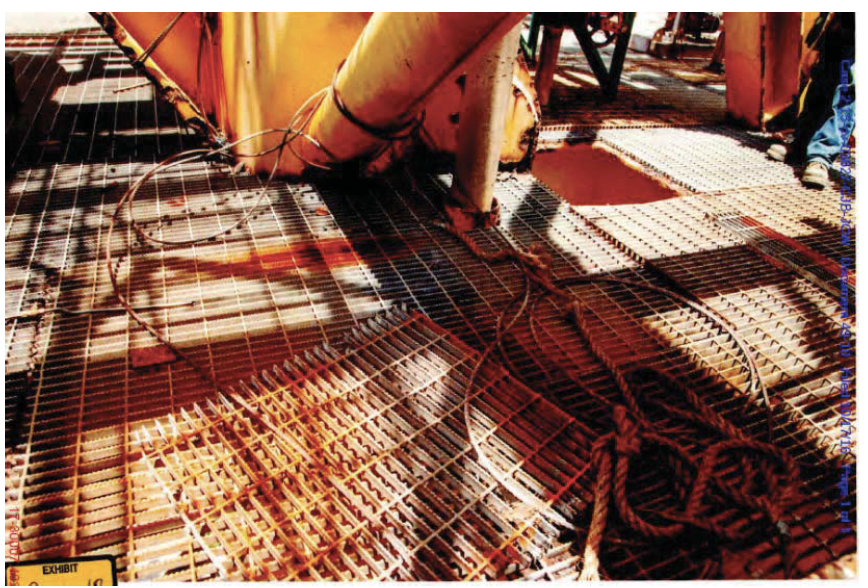 Inspecting a salvaged oil production platform for "excess oil in pipes," James LaFleur fell through a hole 50 feet to his death on a barge deck below. His surviving spouse and children brought survival and wrongful death claims under the Longshore and Harborworkers' Compensation Act and state tort law.

On remand, the court recited that contrary testimony - quoted above - in findings of fact favoring plaintiff recovery. A September 4, 2018, judgment based on those findings awarded damages of $4,210,756.00, composed of the following: