An insight on spine soft-tissue quantum holds that differences between general damages for sprain/strain injury at just one level - cervical soft-tissue, for example - and sprain/strain injuries in two or three - cervical plus thoracic and/or lumbar - are small. The theory stands up well under casual observation. Here we’ll attempt a (very basic) quantitative analysis.

The plots below illustrate soft-tissue trial court judgments posted at CompQuantum. They are not intended for quantum evaluation of any particular case. Their utility lies in comparing the sets of single level, two level and three level spine soft-tissue awards.

A precise test of the theory would require measurements on several axes. Variation between plaintiffs, judges, courts, medical evidence and other metrics would have to be considered. Even without that level of detail, raw data comparing basic inputs (alleged injuries) and outputs (damage awards) is useful. These plots depict that data. The first is a plot of general damages and the second is a plot of total damages for one, two and three level soft-tissue complaints. Darker shading reflects overlapping results. 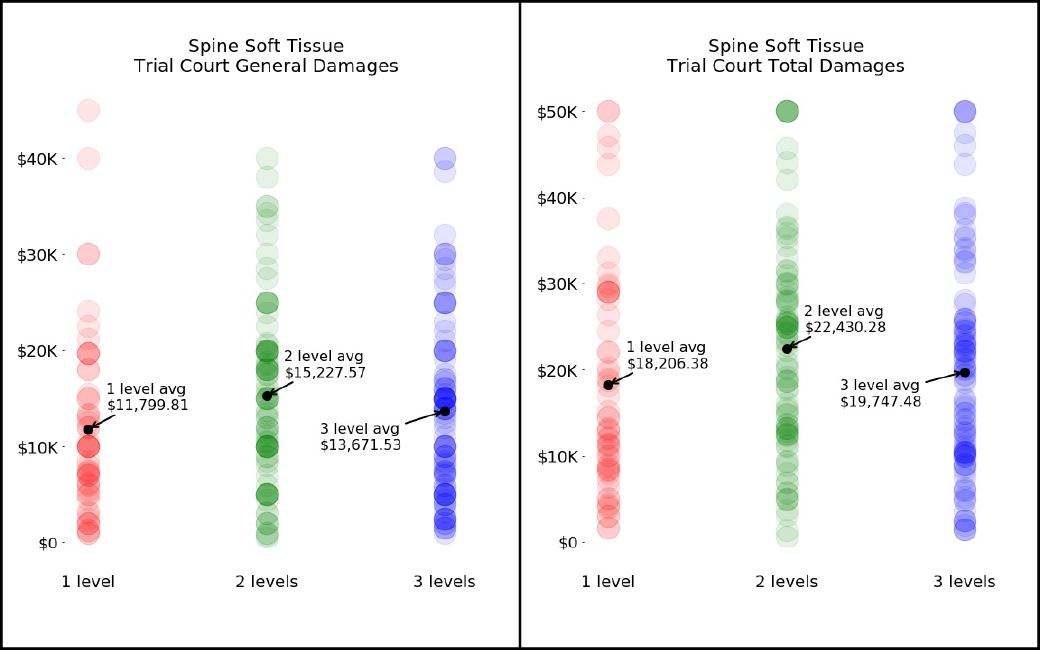 The values are taken from 238 trial court judgments in the CompQuantum database. Appellate results are not considered. Also, judgments awarding no damages are excluded. Included are 97 awards for three level complaints, 87 awards for two level complaints and 54 awards for single level complaints. Only damage awards for spine soft-tissue (and no additional primary injuries) are included. While it is not a complete collection of all soft-tissue bench trials throughout the state, this is a representative sample covering many of the trials over the last couple of years in the major venues.

A couple of things are readily apparent. First, most judgments award damages substantially less than the bench trial stipulated $50,000 maximum. General damages are usually $20,000 or less and total damages are usually less than $30,000. Second, average damages do not vary much between one, two and three level complaints. The deeper analysis briefly described above would help explain the increase between one and two levels (i.e. random variation versus categorical difference). It is interesting that for both datasets the three level average is lower than the two level average. I have some thoughts on why that might be. At a minimum, it suggests that differences are not entirely related to the number of levels of reported and/or diagnosed injury. I may investigate some of these issues further in a future post.